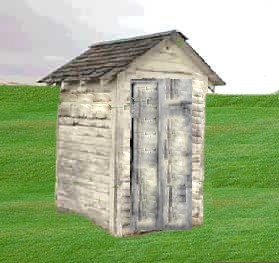 When I was growing up, we had what was called an outhouse.  Every home had one, as that was something that you could not do without.  Back then, there were no bathrooms in the houses.  These outhouses were what were used. The outhouse was a little wooden house down a walk, or path, out back. It had two holes cut in the seat.  One was bigger than the other.  We little ones used the smaller hole, as the bigger one was for adults.  Sitting on the seat was a catalog, out of which you would tear a sheet for your use.

One never wanted to use the outhouse very often.   We would wait as long as we could before we would venture down that path.  In the summer there were always flies or bees to keep you company.  You had to swat them all the time while using the outhouse.  One would tend to hurry through their business as fast as they could, just to get out of that outhouse door.

The weather was always troublesome.  It didn’t matter if it was too hot, or too cold.  Just picture us climbing out of a warm bed, bundling up, going out to the outhouse in the cold and snow, and then sitting on the frosted wooden seat in the middle of winter. Believe me; you sure did not take long to finish the job. It sure was not a neat place to spend much time in.

When one had to go at night time, the noises of the night would scare us little ones.  We would run down the path, leave the door open so that we could see, fearfully watching the shadows in the night.  We would then run back into the house, always hoping that that would be our only trip that night. I often wonder if that was why a lot of children wet the bed.  They sure did not want to venture out back much.  To those of you who never used them, you would never realize what an experience using an outhouse could have been.

Well, the outhouse is gone now, but the memories of us using them linger on.  Those were the good old days.  You have heard many of us say how we would like to have those good old days back, but I am quite sure I would not want that lonesome outhouse back.