Coal began forming on earth millions of years ago. Carbonization of layers of plant and animal debris results in coal.  After hundreds of years in forming, these layers or seams of coal are separated by layers of dirt and rock.  The weight and pressure of rock and dirt layers contributed to the coal forming process also.  Mineable seams of coal in this country vary in thickness from two feet to more than ninety feet.  Most of the coal in this valley is produced from seams of three to seven feet thick.   Coal is often called black diamonds and black gold.  Diamonds and gold are formed in a manner similar to that of coal, but with much greater pressure involved.  Fern leaf and animal fossils are formed in layers of coal.

Entrance to an underground coal mine is by slope, a gradual or slanting incline to the coal seam; shaft, a vertical opening or deep narrow pit; and drift, a horizontal tunnel.  Drift mining is done in hills and mountains.

In pioneer America, forests were handy and plentiful; and, for a long time, coal was used only in blacksmith shops.  Ohio has large deposits of bituminous or soft coal. Anthracite or hard coal, more firmly pressed, is found in other states.

Coal buried deep in the earth is removed by underground mining. Deaths and crippling accidents are common among miners.  Underground mines have dangerous gases such as carbon monoxide and methane sometimes causing explosions.

In the early days of mining, small towns were built close to a mine.  Mining then was hard, dirty work with picks and shovels.  Machines do most of the heavy jobs in mining today. The coal companies built stores for the miners.  Families could charge their groceries, clothes, tools and household goods.  Prices were high and many families spent their earning before they received them.  Mining companies had a coin of their own called script.  If miners wanted to buy something from other stores, they often borrowed script from the company. 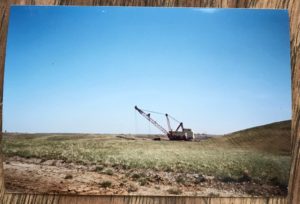 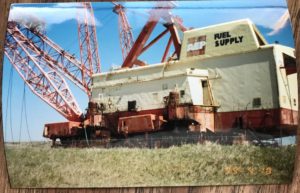 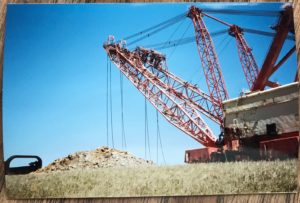 The Big Muskie was the world’s largest dragline and one of the seven engineering wonders of the world.  The bucket weighs 460,000 pounds empty and when loaded carried an additional 640,000 pounds.  Its volume is equal to that of a 12 car garage and its bucket could hold two Greyhound buses side by side.  It cost $25 million to construct using over 200,000 man hours over a period of about two years.

During its 22 years of service from 1969 to 1991, the Big Muskie removed more than 608.000,000 cubic yards of overburden, twice the amount of earth moved during the construction of the Panama Canal.  IT could move 39 million pounds of earth and rock every hour, revealing rich coal seams 100-150 feet below the surface in Southeastern Ohio. 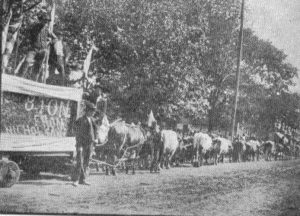 Mammoth Lump of Coal—A lump of coal, the largest ever mined here, was exhibited in Cambridge on August 21, 1886. It weighed 16,000 pounds—eight tons—which is equivalent to 200 bushels of coal, almost a winter’s supply for a family. The occasion for the exhibit was the first miners’ picnic to be held in the Guernsey valley.
From the Nicholson Mine.—It was taken from the Nicholson mine which was located two miles south of Cambridge. This was a drift mine—that is, it was entered horizontally, and not by slope or shaft. The No. 7 vein of coal, which crops out at Cambridge and is so near the surface that it can be mined by “stripping” four miles east of the city, could be reached through a horizontal entrance at the Nicholson place where it varies from four and one-half to seven feet in thickness. At Senecaville this same vein lies 200 feet below the surface.
Andrew W. Nicholson had leased the coal field to gen. A. J. Warner and others, who operated the mine under the name of the Ohio Coal Company, employing about 250 men. The most of the coal was shipped to Cleveland where it was used for domestic purposes.
How It Was Mined.—For much of the story of this mammoth lump of coal we are indebted to Richard Minto, of Madison avenue, Cambridge, who helped to mine it. At the place in the mine from which the lump was taken, the vein was seven feet thick. Two feet from the floor, and parallel to it, was a thin seam of slate. By means of picks and shovels the coal beneath the seam was removed. (Mining machines were not then used in this mine.) Perpendicular cuttings wide enough to admit a miner were made on each side and across the rear, thus leaving the block suspended from the ceiling. A car with low wheels was pushed beneath and the coal was forced loose and upon it by means of wedges. It was then found that the lump was too large to be taken through the entry until some of it had been cut away.
Getting It to Town. —A truck to transport the coal to Cambridge was made, sections cut from a gum log being used as wheels. Having hitched twelve oxen and six mules to the truck, the miners started with their load. Forbidden to cross the upper Wills creek bridge on the north side of the Nicholson hill, they detoured by way of Georgetown and Dewey avenue to the old covered bridge. Here they were told that the bridge would not support the load and animals at the same time. Cables were stretched through and the pulling was done from the north side.
In ascending Wheeling avenue hill the wheels and axles blazed several times as the result of the great friction. When the court square was reached the truck was found to be so damaged by the fires that it could not be drawn to Taylor’s grove where the picnic was held.
Purchased by Otto Thalheimer.—Otto Thalheimer, a Cambridge clothier, paid the miners $100 for the coal, which they applied on the cost of band instruments. The Nicholson band, the first miners’ band in the Guernsey valley, was organized with John P. Turner as director.
Thalheimer displayed the lump in front of his store until winter, then broke it into pieces and gave them to the needy.