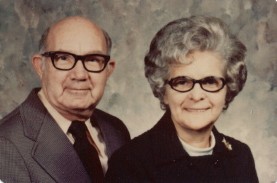 History of The First Church Of God, Cambridge, Ohio
Somewhere around 1934, Mrs. William Harris, now deceased, inspired by the scriptural teachings of the Church of God, began a small Sunday school on the south side of Cambridge.  Later she rented a store room on the corner of South Seventh Street and Marietta Avenue.  Assisted by Rev. C. V. Wells of Zanesville, Ohio, with his co-workers, this building was furnished for church services.    After some months and with the assistance of Rev. E. A. Kline of Lancaster, Ohio, and Rev. W. A. Wilson of Newark, Ohio, now deceased, and with aid of others, revival services were conducted and as a result the foundation of a congregation was laid.  Rev. James B. Riggins, then of Denver, Colorado, was the first pastor, later resigning to go to Corning, Ohio.  Following his resignation, Mrs. Lora Hockinberry and Mrs. Florence Stage faithfully worked to continue the Sunday School.  Rev. C. V. Wells of Zanesville, came each Thursday evening and preached to this congregation in the absence of a pastor.  In September of 1938, Mr. and Mrs. Edgar Lawyer moved to Cambridge and took charge of the sunday school and the Thursday night services.  In 1939 the building was sold on South seventh Street by the owners, and this looked like the death blow to this little congregation.  The furniture and the equipment was placed in storage and the little sunday school was moved to the home of Mr. and Mrs. Edgar Lawyer at 1709 Clairmont Avenue.  It was crowded but it continued there for a year and a half with some growth.  All this time the money was saved for something in the future.  In 1941, this time came and Mr. Edgar Lawyer and C. V. Wells purchased a store building on the corner of Fifth and Foster Avenue.  This building was remodeled and the first service was held on November 2, 1942, with Rev. T. M. Ramsey of Cadiz, Ohio, as the dedication speaker.  At the same time Edgar Lawyer answered the call to the ministry and became the pastor of the Church of God in this location.  The church began to grow slowly but continually under his and Mrs. Lawyer’s ministry.  In January of 1952 this small congregation, with a small building fund, but a great faith  in a great God, began to feel God moving on their hearts and felt it was time to go forward.  In April of 1952, seven lots were purchased on the corner of Lakeside Drive and Sherman Avenue, (although it looked more like a ravine than it did a corner, and a bull dozer changed that later).  In August 26, 1952, Ernest Gross, architect of Anderson, Indiana was chosen to draw the plans for a new two unit church building.  In March of 1953 the ground breaking service was held with Rev. Edgar Lawyer turning over the first shovel of earth, followed by others later.  The building was immediately started under the supervision of Mr. Rolland Myers, general contractor.  On May 31, 1953 the cornerstone was laid with Rev. Aubrey Mitchell preaching the message.  The building continued and the first service was held on November 15, 1953 with Rev. O. O. Bogess beginning an eight day evangelistic meeting.  The congregation continued the completion of the building and adding improvements throughout 1954. until, December 5, 1954, then all was in readiness for the dedication.  The building stands as a monument to great men and women of the past and present, who had faith in God that surmounted every obstacle.  These Christians who knew what  they hoped for and had the evidence of things not yet seen, knew that in His time their God would answer their prayer of faith.  May God bless richly one and all who labored and gave that God’s Eternal truth would not perish from the earth but remain as a rich heritage to the children of tomorrow.

The last project under the ministry of Rev. Edgar Lawyer was brought into being through the death of Bro. L. Elgan Strong in February of 1975.  A nephew, Mr. Sherman Strong, his wife and mother gave a contribution of $150.00 to be used as a memorial for Brother Strong.  Then in October it was presented to the congregation of the First Church of God, and with their contributions reached almost $1,000.00 to be used for a sound system for the sanctuary.  This then with the installation of a memorial plaque in the church building was a fitting memorial for a brother deeply loved, who with his wife was a  beautiful asset to this congregation, and without their help many things could not have been made possible.     Amen. 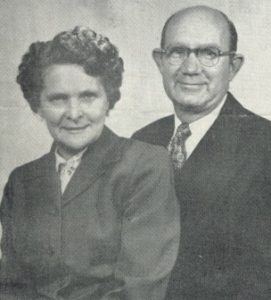